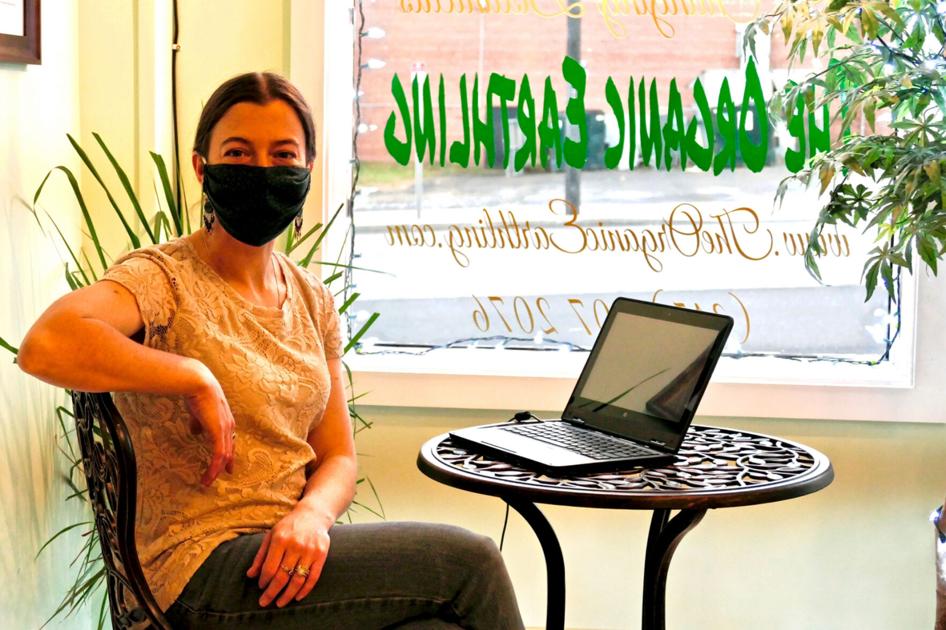 OSWEGO — Late in August, while many businesses were barely surviving the ravages of a COVID-damaged economy, a new business thrust its head up through the forbidding environment, like a crocus through the very early spring snow, and declared it was here. The Organic Earthling was born.

About a month later, on Sept. 24, Oswego Mayor William Barlow cut the store’s ribbon and it was official. What for years and years had been Harbor Towne Gifts at 43 W. Bridge St. was now Oswego’s newest spot for the health-conscious.

“We specialize in CBD products, medicinal herbs, and vitamins,” said Lindsay Gaffney, owner of The Organic Earthling with her husband, James. “But, we wanted to cover the full gamut of health: organic snacks, some teas, raw honey, chemical-free shampoos and lotions, deodorants” and a whole lot more.

CBD is a cannabinoid found in the marijuana plant. However, it is not psychoactive. You won’t get high off CBD. Instead, it is used by many medicinally.

Lindsay Gaffney told her own story of how she and her husband became advocates for it in a recent interview.

“I’ve been interested in medicinal herbs for several years now,” she said, “but my husband wasn’t 100% sold on it. He actually got a brain tumor, and he was on the course of getting the surgery and having it removed. The medication he was on was reducing his pain but boosting his blood sugars and making him very, very sick to the point where they couldn’t do the surgery until he got that straightened out. So, he changed his diet, started taking the CBD, and within weeks, his pain was going away, and he was able to regulate his blood sugars more effectively. We just kept on the course of doing the CBD and the diet changes, and we started introducing different herbs to help with his blood sugars and his blood pressure and just started regulating it naturally. We started working with a holistic doctor, so that way we could safely let some of those medications fall away and just go with diet and herbs and all that sort of thing.”

James Gaffney did not stop taking his medication though. “It would be dangerous,” Lindsay said. “We just integrated the holistic and did it with his medications. It was a gradual process. Now he’s diabetes-free, he doesn’t need the Metformin (a prescription drug), and the last MRI we had done on him, his tumor’s shrinking. He no longer needs surgery. So, we’re definitely huge fans of the CBD, however, we know it’s not a miracle cure. There are other changes you need to make in your life to really get the full healing properties and all that sort of thing.

“When it started working for us,” Lindsay continued, “we’re like, we have to become advocates for this, because people had been telling my husband that he should start taking CBD, that it shrinks tumors. He just wanted to go with what the doctor’s recommendations were and with the medications that he was prescribed. He really didn’t see it as a medicine. You hear CBD, CBD, CBD, and you think it’s a trend or something like that. We were dealing with this for six months, and it wasn’t until they told him he wasn’t safe to have surgery that we decided to start looking at other options.”

James used CBD oil drops right under the tongue, held for 60 seconds, “because the thin tissue under your tongue provides the most absorption,” Lindsay said. After that, he’d swallow and chase it with a little water. He started out doing this twice a day. “But once he saw it was working for him, he decided to up it to four times a day. So, he’s on a pretty heavy dose of CBD, but he’s trying to shrink a tumor. It varies depending on what you’re trying to treat.”

“Normally,” she said, “I would recommend for an isolated pain, you could do the dropper internally and then, also, take the topical rub. So, that way, you can work on your internal inflammation and right where the spot is.”

According to Lindsay, CBD “reduces inflammation and it works lock-and-key with your pain receptors. Some people are much more sensitive to medication than others. Some people feel the effects of it that day. Some people, it takes a week or two to really work into their system. Each person has their own individual experience with it. I can give a general recommendation, but it’s really one of those things. You’ve got to feel your own body and determine after starting it, whether you need to take more or less.”

A bottle of CBD drops costs $40 and, at one dropper full a day, would last a month, which Lindsay said would be long enough to know if it was going to help you or not.

And while CBD is their main focus, “we also have a line of medicinal herbs, vitamins and minerals, and we do a little bit of aromatherapy,” Lindsay noted.

That focus is due to grow even wider in a few months.

They sell munchies. “The Black Forest trail mix is selling like crazy. People are loving that. And the chocolate, too.”

They carry Comley’s milk, including their chocolate milk and a new Comley’s product, plain and maple yogurt. Nearby the milk and yogurt, you’ll find raw honey, jams, and nut butters.

They sell a lot of unique items, like eye pillows and beer soap and shampoo bars that look like a circular bar of soap but are shampoo.

Lindsay said many people are shocked when they walk in. The place is so different from the Harbor Towne Gift store they remember fondly. It’s wide open, and as Lindsay says, has a Zen feel to it.

But times change, cities change, and though businesses change, one thing that hasn’t changed at 43 W. Bridge St. is the friendly kindness and intelligent helpfulness of the owner there. It’s quite nice when some things remain the same.

As an Amazon Associate I earn from qualifying purchases.