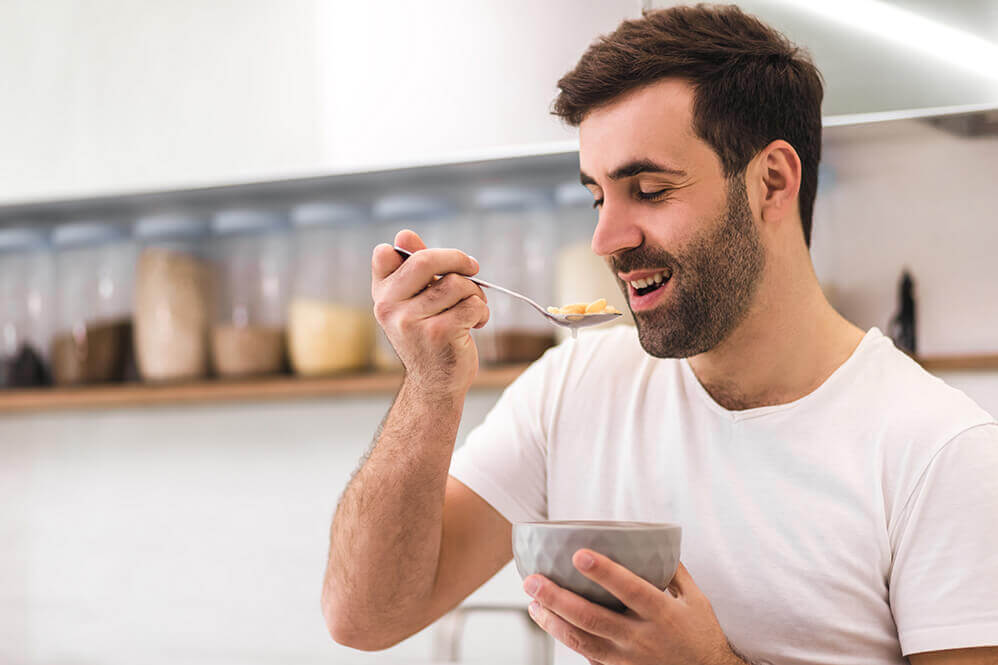 When it comes to CBD, one of the most commonly asked questions is “Does CBD make you hungry?” After all, it comes from the cannabis plant. An increase in appetite is often associated with cannabis, but CBD doesn’t have the same effect?

The increased hunger phenomenon known as the ‘munchies’ is attributed to the cannabinoid tetrahydrocannabinol (THC), which is the psychoactive compound in cannabis–a different molecule to CBD.

So, If taking CBD is part of your wellness regimen, and the thought of increased hunger, makes you think it could stop your wellness goals in their tracks, that won’t be the case.

Whether you’re taking CBD everyday to improve your wellbeing or just using it occasionally to feel more calm and relaxed, the ‘munchies’ aren’t something you need to worry about.

There are many misconceptions about CBD and its effects and it’s part of our mission to debunk those myths so you can get the right information and choose the right products for you.

Here in this post we’ll answer the question: does CBD make you hungry? We’ll cover the following facts so you can know how CBD will affect your appetite.

Can CBD make you hungry?

CBD is one of over 100 cannabis cannabinoids, including its two most famous, CBD and THC. Both compounds interact with our body’s endocannabinoid system in very different ways. THC is best known as the cannabinoid that causes the “high” effect and the “munchies” while CBD makes you feel calm and relaxed.

The endocannabinoid system is made up of cannabinoid receptors found in the brain, central nervous system, reproductive system and the gut. CB1 and CB2 are the main receptors that interact with cannabis cannabinoids.

THC works by binding to CB1 receptors in the brain, this binding effect causes an increase in hunger by simulating the hormone ghrelin known as the ‘hunger hormone’ and alters brain signals that tell you you’re full.

Unlike THC, CBD interacts with CB2 receptors that help bring about balance in your endocannabinoid system. Though these receptors are also found in the gut, CBD doesn’t have the same effect on ghrelin production as THC, so it doesn’t directly cause increased hunger.

How does CBD affect appetite

So, if CBD doesn’t affect hunger levels, does it affect your appetite? First of all, let’s define the difference between the two. Hunger is caused by the biological need to eat to survive and maintain energy levels, while appetite is the desire to eat – the satible need for food, which can be due to emotional and environmental factors.

When CBD is introduced to the body it has the ability to activate the 5-HT1A serotonin receptor to influence its production. 90% of serotonin production occurs in the gut and is responsible for key bodily functions such as sleeping, eating, and digestion.

Known as the ‘happiness hormone’. Is released to balance, mood, feelings of well-being, and happiness. Recent studies suggest that increased serotonin levels have the ability to curb appetite. So, while CBD may not directly reduce or increase appetite it does have the ability to influence other hormones that do affect appetite.

As we discovered, CBD doesn’t cause hunger, but THC does, so what about full-spectrum CBD products? Full-spectrum oils are made from the hemp plant that contains 0.2% THC.

Depending on how much full-spectrum CBD oil has been taken, trace amounts in normal doses wouldn’t be high enough to increase your appetite, unless taken in very high doses.

Early research suggests CBD’s interaction with the endocannabinoid system can affect metabolism. An animal study into the effects of CBD on feeding behavior uncovered CBD has the ability to interact with CB2 receptors that control metabolism and food intake.

While another study found CBD affects the conversion of fat cells. In a process called ‘fat browning’ which turns white fat used by the body for insulation and energy, into brown fat cells that are used to burn calories and create heat.

Preliminary studies into CBD and food in take show promise, but much more research is needed into the effects of CBD on humans for there to be a definitive answer as to whether CBD is effective in appetite suppression or increasing metabolism.

When taking CBD you can expect to feel calmer and more balanced, without any of the increased hunger side effects of THC often experienced when taking cannabis.

The ‘munchies’ are caused when THC increases the production of ghrelin, the hunger hormone. CBD works to promote balance in the body which could restore loss of appetite, instead of the feeling of being hungry.

Early research shows CBD could be effective in promoting hormones that curb appetite and increase metabolism. Yet much more research is needed in humans to know its full effects.

Did we answer your question, does CBD make you hungry? Read our post on how to make CBD taste better if you’re looking to take CBD without the taste.

Jada Lynton is Content Manager at Endoca. She’s passionate about wellness and holistic health and is dedicated to producing cannabis education and wellness content that’s informative and accessible to all–whether you’re a CBD expert or a newcomer. After a personal experience taking CBD for better health, she now continues to help spread the word about the effects of cannabis and cannabinoids.