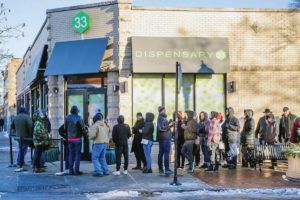 Based on the lines outside Chicago’s Dispensary 33 on opening day, recreational marijuana was a hit in Illinois when sales began Jan. 1, 2020. Which new marijuana markets will be success stories for investors when the dust settles after the 2020 election? (Courtesy photo)

(This story appears in the October issue of Marijuana Business Magazine.)

Would-be entrepreneurs might be eyeballing the marijuana industry in markets poised to launch based on results of the No. 3 election.

But what entry points provide the best return on investment?

Could it be retail, with lines of customers that stretch around the block in new markets? What about cultivation or edibles manufacturing, with products that become “must-haves” for marijuana connoisseurs? Maybe distribution, or even an ancillary company that provides packaging, security or some other type of service?

The simplest answer for anyone looking to make as much money as possible in the state-legal U.S. marijuana markets is to forget about launching a plant-touching business and start some type of ancillary company, several industry experts agreed.

The main reason for that is Section 280E of the federal tax code, which disallows standard business deductions for anyone who traffics in a controlled substance, such as state-licensed marijuana companies. That single provision regularly costs marijuana businesses millions of dollars.

“Why do you think I’m starting an ancillary business? That’s why I’m getting out of the (plant-touching) game,” said Karl Keich, who ran a retail marijuana shop in Seattle for years before selling to a larger conglomerate in 2018. “I was under audit for six years by the IRS. I’m sick of these guys. I’m starting a software company.”

The lack of a tax burden for ancillary businesses easily inflates their profit margins far beyond what most marijuana retailers, growers and manufacturers enjoy, said Andrew Livingston, director of economics and research at Denver-based law firm Vicente Sederberg.

Arguably, Livingston said, those who make the most profit these days are consultants who traffic only in their own know-how, since there’s no overhead for producing advice. Consultants often are able to parlay their expertise into an ownership percentage of plant-touching companies.

In terms of plant-touching businesses, there’s no hard-and-fast rule about which sectors are the most profitable. That’s because there are just too many differences in how state markets are structured.

Some states have no limit on the number of business permits that can be issued (Colorado, Oklahoma and Oregon, for example) while others allow only a handful of companies to comprise the entire industry (such as Florida, Minnesota and New York).

Also, some states mandate vertical integration while others choose to license growers, manufacturers, retailers and other businesses separately.

“Every state has its own situation,” said Mitzi Hollenbeck, a Rhode Island-based CPA who consults with cannabis companies all over the country.

For those trying to win a marijuana business license, the first step is to analyze how many licenses will be available and choose strategically which type to go after.

For instance, Livingston said, a limited-license market with only a handful of cultivation permits available might put license holders in the best position to reap financial rewards because only a few companies will control the entire legal marijuana supply for a whole state.

But the reverse can also be true: If there are a large number of growers or infused product makers but a relatively small number of retailers, then the retail permits are going to have more intrinsic value.

“Let’s say you’re one of the few retailers in Boston or in a prime location in Seattle: There are going to be a lot of different cultivators you could source from, but you have a lot less competition in your small regional area,” Livingston said. “In that relationship, you’re going to have more bargaining power and (can) push those cultivators to compete against each other to provide you with a lower wholesale price.”

Hollenbeck emphasized it’s also crucial to crunch the numbers and analyze what’s doable with the amount of capital immediately available. In that light, she noted, it might be more profitable to invest in a cheaper retail operation than to try to outfit an entire cultivation facility.

“The cost of capital and the cost on the capital investment (for cultivators and manufacturers) is very, very high. … A lot more so than retailers,” Hollenbeck said.

A major downside for many retailers is expensive rent. Hollenbeck warned that marijuana companies often pay five times market price for commercial space, simply because the industry is federally illegal.

Additionally, retailers often have more 280E exposure than growers and manufacturers, Livingston noted, because companies on the production side of the supply chain can fit more expenses into the cost-of-goods-sold column, which qualify as tax deductions.

For retailers, that means “a lot less of their total operational costs are deductible” when it comes to federal taxes, Livingston said.

In states where it is allowed, vertical integration—where a single company controls its supply chain from seed to sale—might be the most profitable plant-touching business type, Livingston said. Those companies are able to streamline in ways that stand-alone retailers or growers can’t reproduce.

A final factor for new market entrants to consider is that change is the only constant in the marijuana industry. That means planning for federal legalization and the possibility of interstate commerce at some point in the coming decade.

“I look at all these clowns that are in Florida … and I see all these cannabis dispensaries that are … doomed for failure,” said Keich, the former Seattle MJ retailer. “When interstate commerce is legalized, it’s going to change the game.”

Keich and others believe the production costs for indoor grows, in particular, are going to be far too high once interstate commerce is legal, which will give way to outdoor and greenhouse cultivation operations that rely mostly on sunlight to drive down their operation prices.

Keich and Livingston both said multistate licensing deals offer some of the best return on investment for plant-touching businesses. Licensing gives a business passive income from new partners but also offers brands the ability to build on a national scale.

“The best ROI is building a brand that people really like and then being able to license that brand out to other states,” Livingston said. “It’s like capital you’ve built and then are able to profit off of by having your partners in other states take up a lot of those costs.”