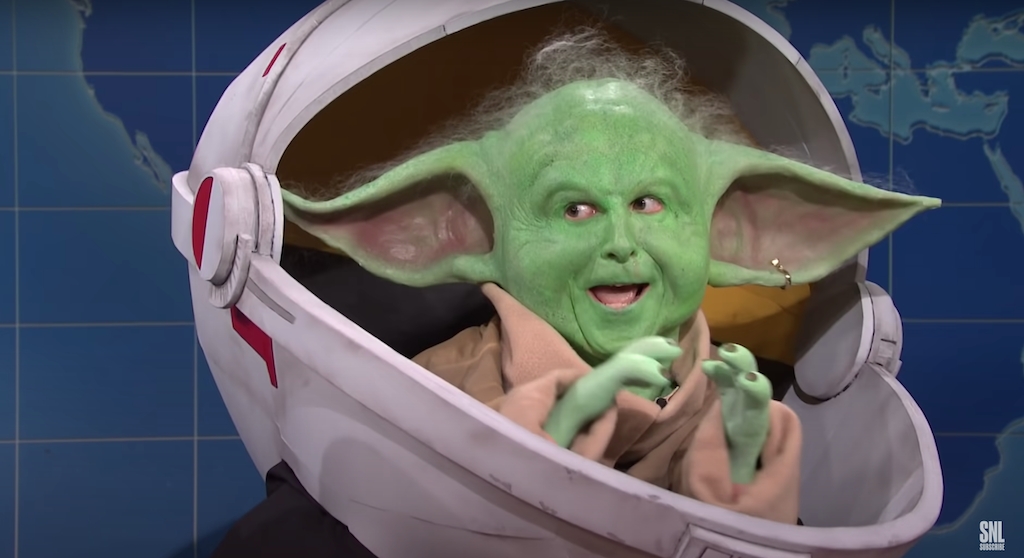 The Mandalorian’s second season dropped on Disney+ Friday, and though there’s certain developments that make it more than just more of the same, let’s face it: Everyone’s still mostly talking about Baby Yoda. To the shock of no one, the breakout star of Disney’s breakout Star Wars show made an appearance on Saturday night’s John Mulaney-hosted SNL, appearing as a surprisingly gabby guest on “Weekend Update.”

As portrayed by Kyle Mooney, SNL’s take on Baby Yoda not only talked but was curiously plugged into modern pop culture. Fitted with an earring, he said he’d spent the summer quarantining with fellow internet celebrities, including the ever-controversial Logan Paul. But he made sure to talk smack about another, lesser fictional internet phenom.

“Baby Groot: We ain’t friends,” Baby Yoda said into the camera. “I know you still talking smack about me, and I just want to say your Tik Toks are cringe, yo.”

That said, Baby Yoda gets along a lot better with another internet sensation. “You might have heard me on Joe Rogan’s podcast, talking about my new line of cannabis product,” he told co-anchor Michael Che. “That was a chill five hours.”

That prompted Che to ask Baby Yoda if he toked. “How do you think I got so green?” he responded. He then shilled for his line of Star Wars-themed weed goods: Dagobud, Wookiee cookies, and a CBD kombucha called Jabba the Kombucha.

You can watch Baby Yoda’s full “Weekend Update” appearance above.