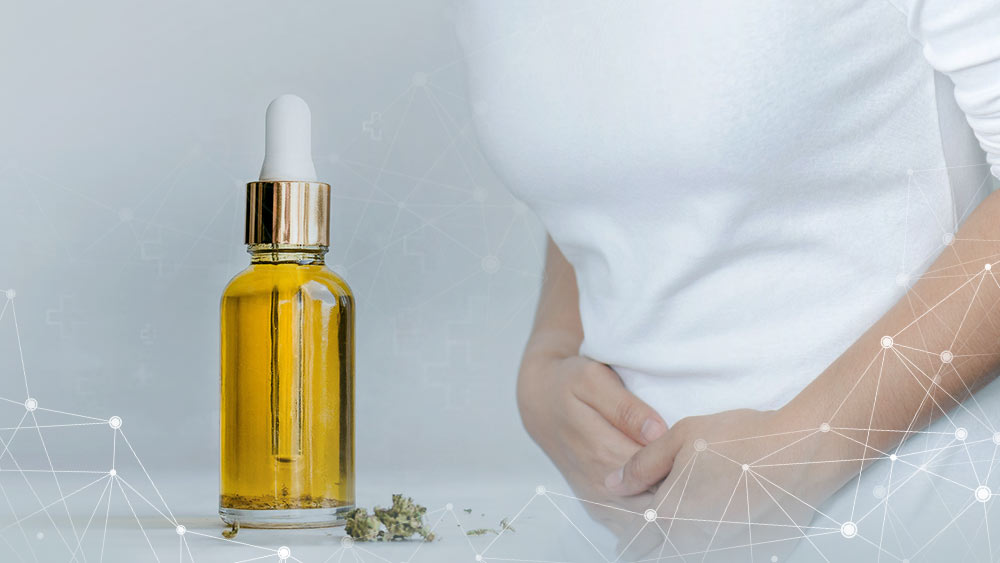 Contemporary science is actively investigating the relationship between CBD and irritable bowel syndrome, and the results of multiple studies show that CBD has great potential for treating symptoms of IBS.

Besides the diminishment of IBS’ primary symptoms including abdominal pain, diarrhea and constipation, CBD is also beneficial for accompanying disorders such as anxiety and depression, which often plague IBS sufferers.

Now, let’s check out some studies that show promising results regarding the benefits of CBD for this disorder.

This 2013 review noted that CBD has potential as a therapeutic compound for irritable bowel diseases (IBD).

Researchers mentioned that cannabis was viewed as a potential tool for the treatment of IBD for a long time because of its potent anti-inflammatory properties.

But, its use in clinical therapy remained limited due to the psychotropic effects of THC.

Unlike regular cannabis, CBD produces no psychotropic (mind-altering) effects, and is therefore far better suited for frequent use.

These researchers concluded that “CBD is a very promising compound since it shares the typical cannabinoid beneficial effects on gut lacking any psychotropic effects”.

A 2011 study stated that enteric glial cells (EGC) mediate both chronic and acute inflammation in the gut.

The team behind the study mentioned that CBD is a very interesting compound for various bowel disorders, because of its ability to control reactive gliosis of enteric glial cells, without any psychoactivity associated with regular cannabis.

This 2008 study linked the concept of the endocannabinoid system deficiency (CECD) as the underlying reason behind numerous disorders including IBS, migraine, and fibromyalgia.

The dysfunctionality of this system is potentially behind numerous disorders including IBS, and the fact that cannabinoid therapy benefits all these disorders greatly supports this hypothesis.

The researchers behind this study concluded:

How Much CBD Oil Should I Take for IBS

Finding a CBD dose that suits your personal needs is very much a unique journey, primarily because people react to CBD quite differently.

This difference is generally attributed to age and overall health, but is also connected with the functioning of the endocannabinoid system.

As previously mentioned, some people have a dysfunctional endocannabinoid system, which directly influences how effective the CBD therapy will be.

It’s advised to begin your CBD therapy with average doses ranging from 15 mg to 20 mg, and observe the produced effects.

If you don’t experience any effect during the first couple of tries, chances are your endocannabinoid system is deficient.

If this is the case, it’s advised to continue consuming daily doses of 15 mg to 20 mg of CBD, because frequent exposure to cannabinoids like CBD gradually makes the endocannabinoid system functional again.

This process usually lasts for a couple of weeks, and it’s important to mention that only a small percentage of users have to go through this.

Also, if you experience noticeable effects but they are too weak, feel free to increase your dose.

Doses in the range of 40 mg to 60 mg are considered stronger, and studies have shown that CBD is safe for use in very large amounts (up to 1,500 mg per day).

CBD oils are consumed by placing a dose of the oil under the tongue with a dropper.

It should be left there for about one minute to allow the oil to be absorbed in the bloodstream through the veins under the tongue.

After holding it for approximately one minute, any remaining oil should be swallowed.

CBD capsules are also a valid method of administration, but it takes more time for capsules to start producing any effects because they have to be dissolved in the gut.

Oils take around 15 minutes to start working, while capsules require around 60~90 minutes.

Side Effects and Drug Interactions

Some users tend to have negative reactions to CBD, and thus experience slight adverse effects.

Science still hasn’t uncovered why some people experience side effects while others don’t, and the only way of determining how the CBD therapy will affect you is to try using it.

CBD interacts with all medications that have a grapefruit warning on the packaging, but also with grapefruit juice.

This is because all these substances are metabolized (broken down) by the same enzyme – CYP3A4.

If a user consumes several substances that are metabolized by this enzyme, the body will have a hard time metabolizing all the substances at the same time.

This could lead to elevated levels of one of these substances in the body, which is potentially risky and should be avoided.

Some drugs don’t have a grapefruit warning even though they are metabolized by the CYP3A4 enzyme, so if you’re using any medications, please inspect the insert slip for any mention of this particular enzyme.